Excerpts from the Book….”BECAUSE I’M A WOMAN” 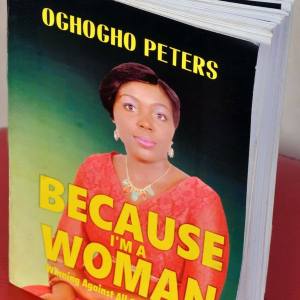 I am not of the Opinion that Women are Superior to Men but We are not inferior to Men.
I was made the Resident Pastor of our Church, few years ago. One day, I had a meeting the Leaders of the Church in a bid to get suggestions that can help to move the Church forward.
I was surprised to hear someone say that it was better to have a Man as their Resident Pastor. He said Women find it easier to Share their Problems with Men; and Men find it easier to share their burdens with Men.
He implied that a Woman cannot pastor Effectively because She is a Woman. I felt insulted and humiliated. I made up my mind to excel as a female Resident Pastor.
Many of us have been told that We can’t lead, We can’t become great, We can’t float a Business….Simply because We are Women. I don’t seek to outdo any man but I refuse to believe that Women should not be given a Chance, Simply because they are Women.
One day, I boarded a transport car. The car was billed to move from Asaba to Abraka, Nigeria. I had paid my fare. I sat at the left edge of the back sit. Another Woman sat at the right edge of the back sit. A Man came to board the same car. The only place available for him to sit, was in between two of us(ladies).
When he was Shown his sit, he bluntly refused to sit there, citing that he could not sit in between two ladies. I found it bizarre and obstinate. I couldn’t believe my ears. Sad but true. This is how many Women have been humiliated, ostracized, abandoned, cheated, abused, simply because they are Women.
We are not to compete with Men, We are to Complement Men. I agree that there are some things that Men do better than Women and Vice versa.
In most cases, Women cook better than Men but this does not mean that We don’t have excellent male cooks. Why then Should a Woman be excluded from being a President, General Manager or CEO simply because She is a Woman.
If She desires to do what seems to be exclusive to Men, She should not be ostracized. She should be given a Chance. The Zelophahad daughters were told that they could not inherit their father’s properties. When the matter was brought to Moses. He prayed to God and God said a portion should be given to them (Numbers 27).
Gender equality does not mean that a Woman should not submit to her husband.
It only means that a Woman should not be disadvantaged Simply because She is a Woman.
The Author
Oghogho Peters is the Founder of Healing Bread Outreach, a Ministry to the Sick, oppressed, depressed and hurting in the Society. She is a graduate of Veterinary Medicine from the University of Ibadan.
She is married to Rev(Engr) Elvis Peters Uto.
She is a Mother and they make their abode in Delta State, Nigeria.

One thought on ““BECAUSE I’M A WOMAN” by Oghogho Peters”